A bit of history…

CIRM: a private property till the 20th Century

The history of Luminy
The history of the Luminy estate dates from around 1005 A.D., when it became one of several parcels of land between Marseille and Toulon which was exchanged as dowry for the marriage of Fulco Viscount of Marseille and Lady Odile. In the 11th century, the buildings at Luminy, which included a chapel, were owned by the monks of the Abbey of St Victor. At an unknown date, the Luminy estate became the property of a Cistercian order, the « Mont de Sion » and in 1242, the constructions on the site were enlarged by an abbey. Luminy became known as the « Mont Sion Abbey » and took on the responsability of educating young wealthy women from Provence.

The Ollières property
The property was acquired by the d’Ollières family in the middle of the 16th century and was planted for the first time with wheat, oats and grapes. A chronicle of the time reports that at Luminy, « there were excellent-tasting muscat grapes and vineyards which provided wine to the monks of St. Victor abbey. And there were many orchards: olive trees provided oil, mulberry trees formed a long alley behind the estate, and there were figs, almonds and cherries. » A 1754 map from the General Government of Provence mentions the domain of « Luminie ».

The Fabre’s domain
In 1819, Madame Baudoin, d’Ollières’ widow, sold the domain to Augustin Félix Fabre for 107,000 francs. Thus Luminy became the property of shipowners, its destiny linked to the Marseille business expansion, and eventually to French colonial expansion.
At that time, the property consisted of 1200 hectares. Two hundred of these hectares by the sea were plantable and were used for vineyards, alfalfa and grains. The pine forests and hills were used to raise goats and sheep. When Augustin Félix died in 1850, the estate was divided between his heirs and its history would thereafter become inseparable from that of the Fabre family. A large reservoir (5000 m3) was built to irrigate the fields, and the surrounding areas were carefully maintained and planted with cedar, chestnut, and lime trees … Extensions were added to the main house to host different members of the family, but it kept its original simplicity in spite of its designation as a « château »… Letters written between 1853 and 1864 by the wife of shipowner César Fabre to her children, Cyprien and Augustin, portray daily life in one of the biggest country estates in the Marseille region during the « belle saison ».
It’s generally from the first days of July that the family move to the « château » for the summer – going to Luminy at this time is an expedition and excludes any escapade apart from the long stays…. « the family » or more exactly the women and children, because the men are held back in town by their business until the end of August or later. The men make the trip on horseback, which takes about an hour. By carriage, the trip takes an hour and a half. « For the children, these holiday times were paradise., » reports Roland Caty. « Luminy meant holiday. When it is very hot, one swims in the pool, and there are also expeditions – along the paths to the seaside creeks with Aunt Léonie – from which one brings back sars and girelles; one takes a picnic, and leaves all day with the mule. In the autumn, it is the mushroom picking that worries the servants ».

Le XXe siècle
The 20th century
In 1918, the property was in a state of undivided ownership, which lasted until 1923. Paul Cyprien Fabre then became the sole owner of the domain, where he carried out numerous works: renovation of the park, opening a road giving access to the creeks of Sugiton, replanting of pines, oaks, Atlas cedars, etc.

In 1945, Luminy became a public estate. The public assistance plans to build a hospital there – but it will finally be built in St Antoine – (the North Hospital). The Bastide was used as a summer camp; schoolchildren were also received there for « open air » classes in the 1950’s.

In 1966, the State (Rectorat) became the owner of the Domaine Universitaire de Luminy where a Faculty of Sciences and a University campus were built.

Well before the 1970’s, the SMF (’Société Mathématique de France’) and several French mathematicians were involved in discussions  to find a site which would be dedicated to international seminars and research in mathematics. In fact, since 1954, a report from the CNRS had recommended such a meeting place, similar to the Mathematisches Forschunginstitut Oberwolfach (MFO) in Germany. The choice of Luminy as a place to develop this centre was made in 1976 and, in 1979, SMF was given part of the Luminy estate including the ’Bastide’ building together with two more buildings. Intensive buiding works were carried out for 20 years to develop seminar rooms, board and lodging.

(*) For many years, a ruin known as the Maison du jardinier, where the Fabre family gardener had lived, stood in the center of CIRM’s grounds. Since 2013, and in conjunction with the launch of the Jean-Morlet Chair, this batisse has been able to be rebuilt thanks to private and public donations. After demolition, the house was rebuilt identically on the outside but renovated in a decidedly modern and comfortable style on the inside. Today, this house welcomes visiting professors who have been awarded the Jean Morlet Chair semesters, as well as their long-term guests. It can also when it’s available, accommodate participants who wish to come to CIRM with their families. 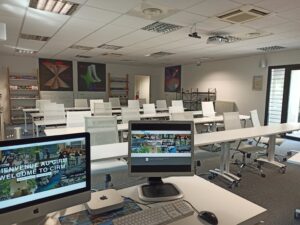 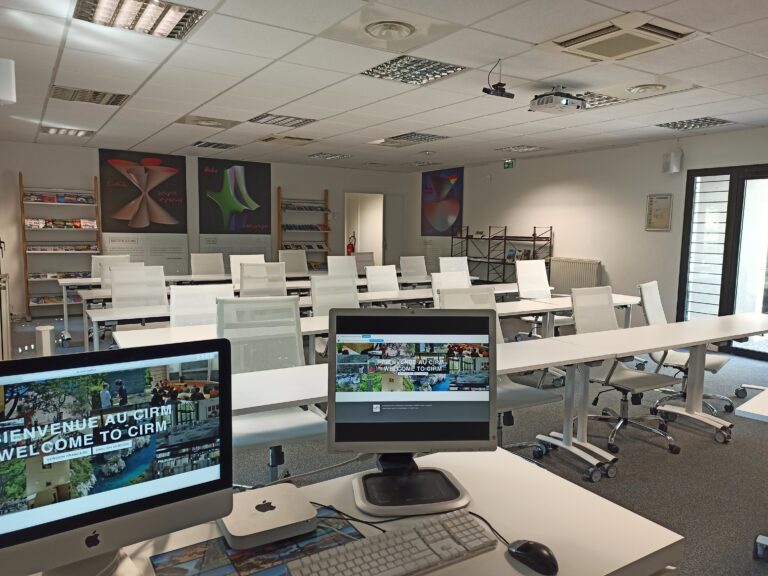