Passer au contenu
⟵ BACK TO ALL PROJECTS 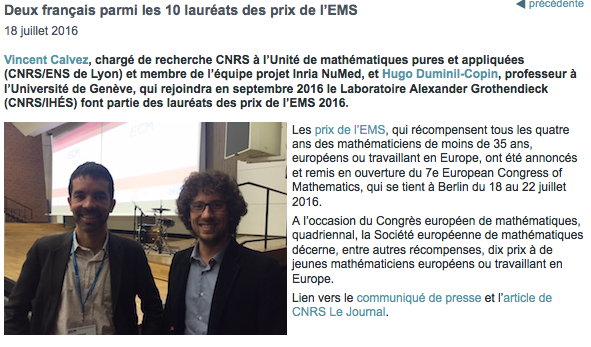 Two French mathematicians are among the ten recipients of the 2016 European Mathematical Society (EMS) prize: Vincent Calvez, chargé de recherche CNRS at the Unité de mathématiques pures et appliquées (CNRS/ENS de Lyon) and member of the Inria NuMed project team, as well as Hugo Duminil-Copin, professor at l’Université de Genève, who in September 2016 will join the Laboratoire Alexander Grothendieck (CNRS/IHÉS). These prizes are given every four years to mathematicians under 35 years of age who are from or who work in Europe.

Vincent Calvez’s early research involved the modelization of the collective movements of bacteria toward their sources of food. These processes are simulated by transport equations presenting nonlinear interaction terms, which take into consideration the fact that the cells are aggregated. In connection with experimental biologists, Vincent Calvez developed a new model inspired by the kinetic theory of gases. This model describes both the individual movements of bacteria and the transport of colonies as a whole, and satisfactorily explains the specific characters of this movement. Another productive interaction was a collaboration with biophysicists that provided a new explanation for cell polarization, a ubiquitous biological phenomenon. More recently, Vincent Calvez and one of his students created a completely new approach to modelizing invasion fronts in ecology, another example of a phenomenon spreading in the form of waves.

Hugo Duminil-Copin’s research has made considerable contributions to percolation theory, a branch of probability theory that is concerned with the behavior of connected clusters in random graphs. In particular, he is studying random walks, also known as “drunkard’s walks” because the direction of each new step is chosen at random. Along with his thesis director Stanislav Smirnov, he is interested in self-avoiding random walks, in which the “drunkard” never returns to a place that has already been visited. The number of possible paths for a number of given steps depends on the network on which the movement is taking place. When there are a large number of steps, its value is expressed simply in accordance with a constant, called the “constant of connectivity.” Hugo Duminil-Copin succeeded in calculating the value of this constant in the case of a honeycomb lattice. These self-avoiding random walks are central to understanding important questions in physics, and are used, for instance, in statistical mechanics, such as the simplified models of polymer chains.
Link to the Press release on the website of the CNRS

Many thanks to Insmi and to Cnrs Le Jounal, both present at 7ECM with CIRM, for the above artcles, information and photos!